All is not well with the All Progressives Congress as pressure is mounting on its chairman, Adams Oshiomhole to resign. 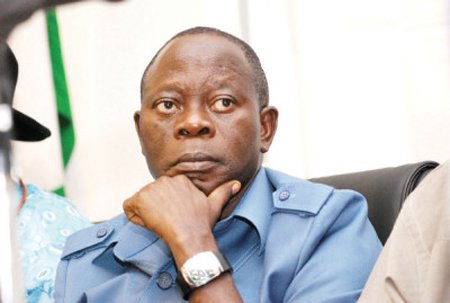 The demonstration in Zamfara began around 9:00 a.m., with hundreds of members gathering at the party’s headquarters. They marched through major streets, chanting songs denouncing National Chairman Adams Oshiomhole and calling for his resignation.

The protest was reportedly organised by chairmen of the 14 local government areas, led by Aminu Gamagiwa, chairman of Maru local government and the All Local Governments Forum of APC chairmen in the state.Addressing the crowd, the secretary of the forum, Babangida Mohammed, declared that the party in the state had lost confidence in Oshiomhole’s leadership.

He accused the national chairman of allegedly sponsoring crises in the state and of arbitrary and unconstitutional dissolution of its executive. He also claimed the chairman disenfranchised many loyal members through botched state primaries.Mohammed handed a protest letter to the state APC secretary, Alhaji Sani Musa Mafara, for onward delivery to the National Working Committee (NWC).

Ripples from the primaries were also felt in Minna, the Niger State, where protesters reportedly blocked the road leading to Government House, alleging the party’s leadership replaced the name of their candidate.

They claimed the party substituted Jafaru Illiyasu Auna, believed to be the winner of the ticket for Magama/Mariga/Rijau Federal Constituency, with Shehu Saleh, a contestant for the Zone C senatorial ticket. They also claimed the national leadership of the party withdrew the certificate of return from Auna.

“Those who feel aggrieved reserve the right to demand that justice be done. If this includes the removal of Mr. Oshiomhole, so be it,” said Dr. Oladoyin Odebowale, an aide to Ondo State governor, Oluwarotimi Akeredolu.

In a statement in Akure yesterday, the senior special assistant to the governor on special duties and strategy said: “Those who collected varying and humongous amounts as fees from aspirants during the last grandiose charade called primaries and submitted names dictated to them by a cabal, notorious for capturing political power for unbridled pillage, should be bold to explain their real motives to the people.

“They should be honest enough to deal with the issues. Events, which took place across the country during the political charade, have exposed not only sheer incompetence on the part of the national leadership of the party, but painfully, it has revealed a shocking proclivity towards banditry and impunity.”

Pro-Oshiomhole protesters had earlier in the week accused Akeredolu of spearheading a plot by some APC governors to remove the embattled chairman.Not everyone in Ondo agreed though. Mr. Biyi Richard Orilabawaye, a member of an APC faction in the state, said the governor was “guilty of everything he is accusing Oshiomhole of.” Akeredolu has sown the wind and should therefore reap the whirlwind, he said.

Rather than stay in the party, complaining, Senator Florence Ita-Giwa simply returned to the opposition People Democratic Party (PDP). In a statement released to reporters in Calabar yesterday, she said she could not fathom how the APC could have popular and tested leaders who can muster tremendous goodwill for the party and yet treat them with disdain.

Senator Shehu Sani, who defected Tuesday, described the APC primaries in Kaduna as“organised crime and a coronation of fraud.” A party that wants to “deliver change should not fake a pregnancy,” he said. Until he jumped ship, the senator fought and lost a suspense-full battle to win a return ticket to the legislative chamber.

Also, in Imo State, the party’s use of automatic tickets came under fire, with a warning that unless the “injustice” is addressed, the “party will harvest litigations upon litigations.”A group of party stakeholders, led by one Okenzi Sylvester Obinna condemned the decision by the NWC to grant automatic tickets to Senator Ben Uwajimogu and three members of the National Assembly from the state

The group claimed it has information proving that the party dropped the names of four of its members, including Prof. Nnamdi Obiareri, who were duly elected in the state primaries.

The Enugu State chapter however dismissed calls for Oshiomhole’s resignation. At a press conference, chairman of the party, Dr Ben Nwoye, argued: “Oshiomhole is God-sent to APC. He took over few months ago but has won elections in Ekiti and Osun, as well as senatorial elections. Those calling for his removal because they lost in the primaries lack the capacity to remove him. He will finish his tenure; he has done well and should be allowed to continue.”

Jude Ejiogu distance self from Okorocha’s diversion of N26billion bailout