A man has reportedly kidnapped his cheating girlfriend’s mother in a community in Abia state before collecting ransom. 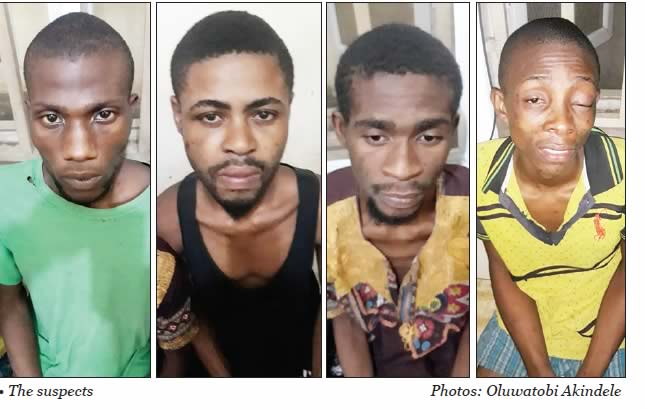 A man identified as Chinindu Innocent, has been nabbed by the police for allegedly kidnapping his girlfriend’s mother in the Ukwa West Local Government Area of Abia State, Punch Metro reports.

It was reported that Innocent and three other members of his gang –Ekendu Chidiebere, Tochukwu Samuel and Ikechukwu Nwankwo – were rounded up by operatives of the Inspector General of Police Special Intelligence Response Team, led by the Deputy Commissioner of Police, Abba Kyari, a few days after they collected a ransom of N300,000 and released the victim.

Punch Metro reports that 24-year-old Innocent had been kidnapped along with the victim in her apartment on Aparazu Ogwu Community in Abia State.

A source said the victim, after she was released, said Innocent was always urging her to persuade her family to pay the ransom demanded by the kidnappers.

The IRT reportedly invited the suspect for questioning after a petition had been written to the Inspector- General of Police, Ibrahim Idris, by a relative of the victim, Agnes Simion.

Upon interrogation, Innocent allegedly confessed to the crime of masterminding the kidnap of his girlfriend’s widowed mother, adding that the move was to punish her for allowing his girlfriend to date another man.

The Abia State Indigene said, “I reside at Aparazu Ogwu community with my cousin. The woman we kidnapped was my girlfriend’s mother. They have a telecom mast in their compound and I used to go to their house to charge my phone. I made friends with them and the woman’s second daughter became my girlfriend.

“A few months into our relationship, I discovered that my girlfriend was seeing someone else. I confronted her about it and she threatened to end the relationship. I told her mother about it but she did nothing.

“My cousin in whose house I reside in Aparazu Ogwu community approached me and sold the idea of kidnapping to me. He told me that one of his friends, known as Onyemywa, who has made money from kidnapping told him that people in the community could pay us huge money when we kidnap them.  I suggested that we kidnap my girlfriend’s mother.

“The woman has been nice to me, but the misunderstanding between her daughter and I made me restless and I needed to punish her.  I asked my brother to bring in his friends to kidnap  the woman and we agreed that I would be on ground when she will be kidnapped.

“I did what they wanted and on the day she was kidnapped, I was at her house and we were both abducted and taken to a forest in Omuma village.  My gang members demanded N1.5m from her brothers, but they ended up paying us N300, 000.”

Chinindu, however, stated that he and his brother did not get any money from the proceeds of the operation.

“The gang members who took the money refused to give my brother and me our share because they thought that the woman’s relative would pay more than they did.

“While we were still trying to get our share of the money, the police arrested my brother and me.”

The Force Public Relations Officer, Moshood Jimoh, said he would get back to PUNCH Metro. But a source close to the IRT said the suspects were currently being detained at the force headquarters, Abuja.