Sanwo-olu Will Be Beaten Black And Blue, PDP Boasts

The main opposition party in Nigeria, PDP has vowed to beat the governorship candidate of the ruling All Progressives Congress in Lagos State. 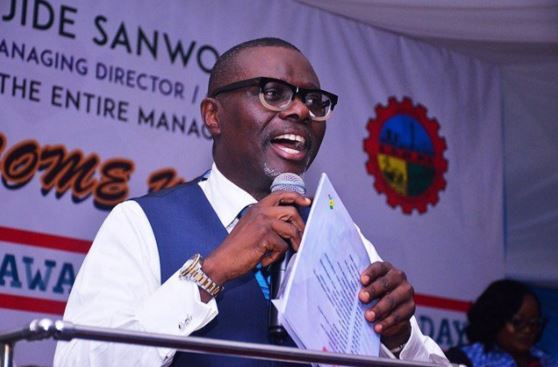 The Peoples Democratic Party (PDP), Lagos State chapter, on Wednesday said the emergence of Babajide Sanwo-Olu as the governorship candidate of the All Progressives Congress (APC) would facilitate a seamless victory for the PDP in the 2019 governorship election in the state.

Speaking to Daily Independent, Gani Taofik, the party’s Publicity Secretary, said the PDP would beat Sanwo-Olu and the APC black and blue, adding that Asiwaju Bola Tinubu, a national leader of the APC, rejected the incumbent governor, Akinwunmi Ambode, for a second term in office because of alleged disagreement in the sharing of the state’s resources.

He said: “We don’t see Sanwo-Olu as a threat at all in the forthcoming governorship election. In fact, we will beat him and the APC black and blue. Our candidate will win him hands down because we know that the only reason why he has been presented is to be used as a conduit pipe to siphon Lagos money.

“It is obvious and in the public domain that the disagreement between Tinubu and Ambode is because of the sharing of Lagos resources. While one insisted that he must continue to get his percentage, the other said that it cannot continue and he wants development.

“So, I think Sanwo-Olu’s emergence has made our job very easy. We will beat him black and blue.”

In another development, Governor Ambode on Wednesday congratulated the winner of Tuesday’s governorship primaries of the APC in the state, Babajide Sanwo-Olu, saying it was time for the state to move forward in order to consolidate on the gains of the last three and half years.

In a statewide address on the outcome of the election, the governor said though the events of the last few days had been characterised by intense political activities which created palpable tension in the polity, the interest of the state superseded that of any personal ambition, and therefore urged members of the party and indeed all Lagosians to support the candidate of the party.

He said: “Fellow Lagosians, the last few days have witnessed intense political activities that have gripped the attention of the nation and created palpable tension in the polity. I strongly believe that the time has now come for the state to move forward in order that the gains of the last three and half years are not lost.

“Dear Lagosians, APC is a great party and the interests of our beloved state must always supersede that of any person or group. It is in this regard that I wholeheartedly congratulate the winner of the Lagos State APC primaries, Mr. Babajide Sanwo-Olu and urge all Lagosians to immediately support our party’s gubernatorial candidate in the 2019 elections and work for the success of our dear party.”

While assuring that he would work to ensure a smooth transition in 2019, the governor said the progress of the state was non-negotiable, saying he would remain forever devoted to the development of the state as he had exemplified since assumption of office.

“As governor, I will do everything possible to ensure a smooth transition in the remaining period of this administration and ultimately to the new governor, come May 2019. I, therefore, appeal to all our party members that we remain one family and unite behind the candidate of the party, so that we can continue to move this state forward.