Tinubu’s camp have been accused of mounting pressure on Governor Ambode to step down and support Sanwolu to be governor. 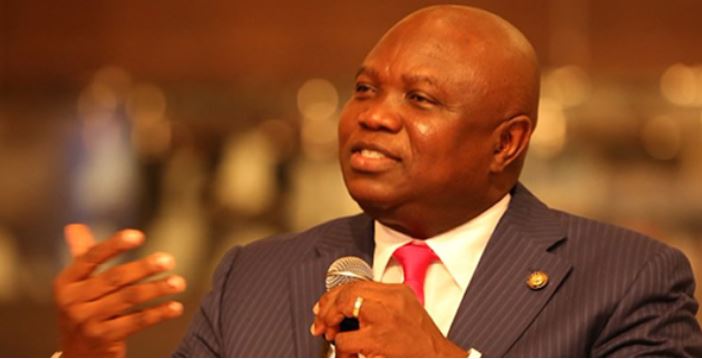 As high-wired intrigues continue to play out in Lagos State over the incumbent governor, Mr. Akinwunmi Ambode’s re-election bid, competent sources saturday revealed that a key segment of the party led by the National Leader of All Progressives Congress (APC), Bola Ahmed Tinubu, has asked the governor to stand down his second term bid or face impeachment.

The threat to impeach the governor is an escalation of pressure being piled on him to drop his quest for second term.

A competent party source sympathetic to the governor, who demanded annonimity since he was not authorised to speak on the intrigues and power play currently playing out informed THISDAY yesterday, “they are threatening to impeach him should he refused to bow to their demand to withdraw. The incumbent governor, who is traditionally entitled to another term is being harassed and intimidated by Tinubu’s political machine to withdraw for their new man, even though the governor had agreed to subject himself to primary. They are boasting that they will direct the State House of Assembly to immediatly begin impeachment proceedings against him.”

The APC had initially insisted on conducting direct primary election to select its governorship candidate in the spirit of democracy. But it suddenly reversed itself, directing Ambode to withdraw from the contest to enable the party present Sanwo-Olu as the consensus candidate.

It also emerged yesterday via a statement from the Vice President’s office denying endorsing Sanwo-Olu. “It was while he was coming out of the GAC meeting that Mr. Sanwo-Olu and Mr. Hamzat took advantage of the VP’S presence to take the photos which are now being falsely paraded as proof of endorsement.

“The VP did not go there to endorse Sanwo-Olu., they only took advantage of his presence,” a source at the meeting confirmed last night.”

Rather, sources at the GAC meetings hinted that Prof Osinbajo, who is believed to be supportive of a second term bid for Ambode, conveyed the view of the Buhari presidency that there should be a level playing field in the overall conduct of the primaries.

Party chieftains spoke with THISDAY yesterday in confidence on the drama that took place at the meeting of the Governor’s Advisory Council (GAC) held Friday night. They disclosed that the APC leader threatened to impeach Ambode if the governor refused “to step down for Sanwo-Olu.” Ambode was said to have looked him squarely in the face and refused.

But Ambode Mandate Support Group condemned the call for the governor’s withdrawal as undemocratic. The group also reacted to the postponement of the APC governorship primary in the state, which has now been scheduled for October 1, saying they were confident that Ambode would fly the party’s flag in 2019 election as it has received overwhelming support from several quarters for him.

There has been uncertainty about governor’s re-election after Sanwo-Olu, currently the managing director of Lagos State Development and Property Corporation (LSDPC), and former commissioner for Works and Infrastructure, Dr. Obafemi Hamzat, declared their intention to challenge the governor in a primary contest.

As a result, the Mandate Movement, a powerful political machine of Tinubu, endorsed Sanwo-Olu for the governorship contest, heating up the state’s political climate ahead of the primary election.

With the presidential intervention, Tinubu decided to consult the Governor’s Advisory Council (GAC), the state’s highest advisory political organ, comprising 22 APC chieftains across the three senatorial districts. But in its resolution, the GAC directed Ambode and two other aspirants to face the direct primary election.

At the GAC meeting held at Tinubu’s residence, Bourdillion, Ikoyi, Friday night, one of the party chieftains explained how Ambode addressed the leaders of the GAC, justifying point by point the reasons he decided to seek re-election in 2019.

Specifically, according to the chieftain, Ambode hinged his re-election bid on the need to complete various infrastructure projects and urban renewal programmes that his administration initiated in the last three years.

Despite his justifying his re-election bid, the party chieftain stated that Lagos Central APC leader, Prince Tajudeen Olusi, asked the governor “to step down for Sanwo-Olu. He claimed that the GAC had already endorsed Sanwo-Olu as the party’s consensus candidate.”

Another party chieftain revealed that a member of the GAC, Prof. Tunde Samuel, interrupted Olusi while he was telling Ambode to withdraw from the race, observing that Olusi’s statement did not reflect a common position of all GAC members that all aspirants should face primary contest.

In response to Olusi, however, the party chieftain claimed that Ambode simply told the meeting that he “will not step down for any governorship aspirants on the ground that it is undemocratic. He also said he stood by the earlier position of the GAC that all aspirants should face direct primary contest to foster democracy in the country.

The source stated, at this point, Tinubu, who chaired the GAC meeting, became angry and quickly interjected, threatening Ambode with impeachment, if he failed to stand down for Sanwo-Olu before the primary election earlier scheduled to hold today which was later postponed till tomorrow by the APC national secretariat.

THISDAY learnt that it was resolved at the meeting that a stakeholders’ meeting should be held on Saturday at the party secretariat, Acme road, Ogba. It was expected that Tinubu would come to the meeting to endorse Sanwo-Olu. To their surprise however, thousands of Ambode’s supporters thronged the venue chanting Ambode solidarity songs and raining curses on national leader: Tinubu ole Tinubu ole!

Eventually, Tinubu was forced to stay away.

When THISDAY contacted Tinubu’s Special Adviser on Media, Mr. Tunde Rahman, for his reaction to the threat to impeach the governor by Tinubu’s camp, he responded, saying he did not “have any comment to make.”

Rather than attending as originally planned, Tinubu delegated a GAC leader, Senator Anthony Adefuye, to represent him.

At the stakeholders’ meeting, Adefuye acknowledged that there was another GAC meeting, which held by 10 am on Saturday, noting that the
meeting was attended by the Vice President, Prof. Yemi Osinbajo, Majority Leader of the House of Representatives, Hon. Femi Gbajabiamila, and Speaker of the Lagos State House of Assembly, Hon. Mudashiru Obasa, among others.

Adefuye said, “The meeting was chaired by the APC national leader, Tinubu. This is a meeting that we started at 10am. And we could not finish early. After the meeting, I have been mandated by the GAC to announce this to you that the primary earlier scheduled for Saturday, September 30 has been shifted to Monday, October 1.