While speaking during a press conference, Thailand’s Tourist Police Chief, reveals why the country is singling out Nigerians for investigation over the incessant scam on marriage-seeking Thai women. 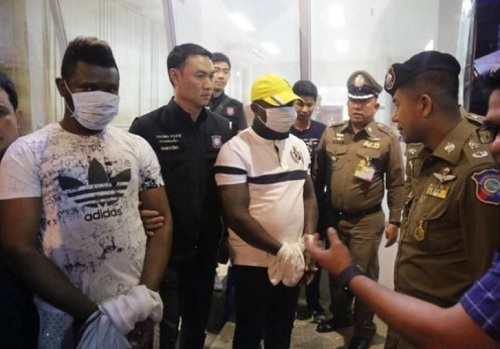 Some arrested Nigerians in Thailand

Briefing journalists during a press conference on Saturday, September 15, Thailand’s Tourist Police chief, Pol Maj-General Surachet Hakpal said that the Tourist police will soon conclude their focus on all 1,400 Nigerians living in Thailand.

He says singling out Nigerians for investigation was needed as many are scamming marriage-seeking Thai women, adding that police would recheck Nigerians living in Thailand to ensure they are living in accordance with the purposes they stated in their entry visa applications.

Surachet said singling out the entirety of one nationality for police attention was needed after “many Nigerians” were found to be taking part in romance scams deceiving Thai women. He said five Nigerians had been arrested in romance scams.

He shared the progress so far of a police crackdown on romance scams, saying that five Nigerians and 12 Thai accomplices from eight gangs had been arrested from 39 areas in Chon Buri, Surat Thani, Trat, Phitsanulok, Bangkok and other provinces for deceiving 48 marriage-seeking Thai women out of Bt5.9 million.

The suspects were members of eight different networks of online love scammers preying on Thai women.

Combined teams of police arrested the suspects in Bangkok, Chon Buri, Nakhon Si Thammarat and other provinces between Aug 30 and Sept 13 following complaints by victims duped into wiring money into scammers’ bank accounts.

He was in August given the additional job of assistant spokesman for Deputy Prime Minister and Minister of Defence, Prawit Wongsuwan.

It was learnt that Thai Police have been tracking down people involved in online romance scams since January. To date, there have been 140 cases with damage amounting to 81 million baht.

I will turn around Nigeria's economy in two years - David Mark