The late Senator John McCain of the United States of America has banned President Donald Trump from attending his funeral. 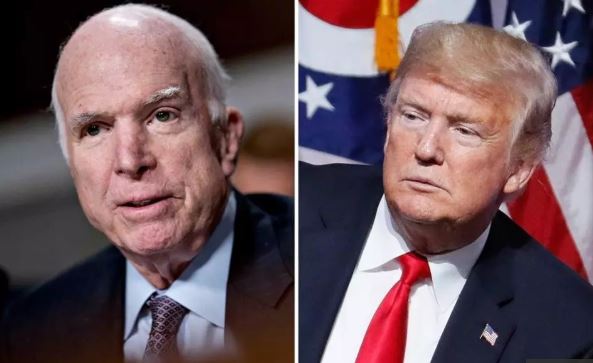 Donald Trump does NOT pay tribute to John McCain’s personal achievements and only offers sympathy to his family, as its claimed the president ‘will NOT be invited to the senator’s funeral’

As the nation mourns the loss of Senator John McCain, preparations for the war hero’s funeral are underway – but one face sure to be missing from the crowd is president Donald Trump.

McCain had been locked in a war of words with Trump dating back to 2015 and specified months ago that he did not want the president to attend his funeral.

Those close to the Republican Arizona senator reportedly started making arrangements for McCain’s funeral in May, nearly a year after he announced that he had been diagnosed with an aggressive and rare form of brain cancer.

He died on Saturday at his Arizona home surrounded by his family at the age of 81.

According to a report by the New York Times, McCain’s inner circle said vice president Mike Pence was invited to the services but not Trump.

The Times cited McCain’s ‘rocky relationship’ with the president as the reason Trump was not on the invite list.

McCain reportedly spent the last year of his life planning his own funeral, CNN reported Saturday night. Friends of the senator said he wanted the service held at three locations: Arizona, the National Cathedral in Washington and Annapolis, Maryland.

Sources said that McCain had requested that George W Bush and Barack Obama deliver the eulogies at his funeral.

Two family members reiterated to CNN on Saturday that Trump won’t be present at the service.

Trump has not commented on McCain’s wishes that he stay away from the funeral, but did offer a short message on the senator’s passing.

‘My deepest sympathies and respect go out to the family of Senator John McCain,’ he wrote. ‘Our hearts and prayers are with you!’

Trump’s statement comes a little over a week after he failed to recognize McCain during a signing of the John S McCain National Defense Authorization Act, which lawmakers implemented to honor McCain’s leadership of the Senate Armed Services Committee and his years of service in the Senate.

During the ceremony Trump praised Rep. Martha McSally as ‘terrific’, but did not once mention McCain, even though the event was in his honor. McSally is seeking the Republican nomination for the Senate seat in Arizona.

At a June rally in Duluth, Minnesota Trump referenced McCain’s ‘no’ vote on the Affordable Care Act by giving a thumbs-down gesture and eliciting boos from the crowd. Meghan McCain fired back in a tweet that Trump’s attacks on her father ‘never stops being gross’.

Trump and McCain’s bad blood stems back to June 2015 when Trump announced he was running for president and called Mexican immigrants ‘rapists’ and drug runners during a speech.

McCain distanced himself from the future-president saying in an interview that he disagreed with Trump’s comment. Trump fired back by calling McCain ‘incompetent’ during a July 2015 rally at the Phoenix Convention Center.

The back and forth banter continued for the next two years, as Trump repeatedly launched public attacks – often times on Twitter – at McCain. In a 2016 tweet Trump slammed the senator as ‘foul mouthed’ and in a 2017 post he lashed out at McCain for voting against the Affordable Care Act.

‘3 Republicans and 48 Democrats let the American people down. As I said from the beginning, let ObamaCare implode, then deal. Watch!’ he wrote.

At one point during the two politician’s bitter feud, Trump mocked McCain’s record as a prisoner of war during the Vietnam War saying that McCain was only labeled a hero ‘because he was captured’ and he liked ‘people that weren’t captured’.

For his part, McCain publicly criticized Trump on numerous occasions. In a July statement, McCain lashed out at the president after Trump said during a meeting in Helsinki with Russian president Vladimir Putin that he accepted Russia’s claim that that they did not meddle in the US presidential election.

McCain said of Trump’s comments: ‘No prior president has ever abased himself more abjectly before a tyrant’.

‘An American president does not lead the free world by congratulating dictators on winning sham elections,’ McCain said.

The senator also wrote about his long-standing feud with Trump in his memoir The Restless Wave saying that Trump’s behavior was disturbing.

‘His lack of empathy for refugees, innocent, persecuted, desperate men, women, and children, is disturbing,’ the book read. ‘The way he speaks about them is appalling, as if welfare or terrorism were the only purposes they could have in coming to our country.’

‘His reaction to unflattering news stories, calling them “fake news,” whether they’re credible or not, is copied by autocrats who want to discredit and control a free press,’ McCain wrote. ‘He has declined to distinguish the actions of our government from the crimes of despotic ones. He has showered with praise some of the world’s worst tyrants.’