Bode George believes Adams Oshiomhole is heating up the Nigerian polity with his alleged unguarded statements made in recent times. 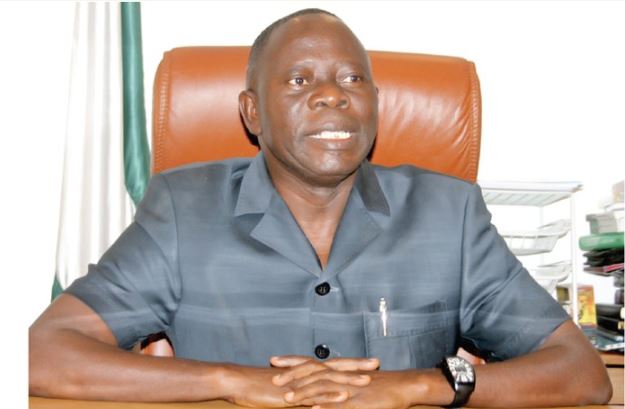 Two elder statesmen, Chief Olabode George and Alhaji Balarabe Musa, on Wednesday came down heavily on Comrade Adams Oshiomhole, National Chairman of the ruling All Progressives Congress (APC), over his persistent threat that Senate President Bukola Saraki will be removed from office at all cost.

During his last meeting with APC National Assembly caucus, Oshiomhole had said Saraki will be removed legally as minority cannot preside over majority.

“I want to reassure the Nigerian people that we are committed to leading by example and that means absolute submission and obedience to the letters and spirit of the Nigerian constitution and everything we will do, we will ensure that it is done according to law, including the impeachment of Sen. Bukola Saraki. There is no hiding place for him. I insist, his time is up.

“The only way that, probably, he could have retained that seat is to decide to return but we will not be ready to welcome him. He must remain where he is and we will continue to ensure that he surrenders the presidency of the Senate to the majority party in the Senate – in line with the provisions of our constitution.”

However, speaking with Daily Independent on Wednesday, George, a former Deputy National Chairman of the Peoples Democratic Party (PDP), appealed to President Muhammadu Buhari to call Oshiomhole to order as his utterances and threats on the issue of Saraki’s position is capable of setting the country on fire.

He also added that there is no basis for Saraki to resign as Aminu Tambuwal, Sokoto State governor, did not resign his position as speaker of the House of Representatives when he dumped the PDP for APC in 2014.

He said, “Why should he resign? I don’t think he should resign. When Aminu Tambuwal left our party for APC in 2014, did he resign as the speaker of the House of Representatives? He did not. So, what is sauce for the goose is sauce for the gander. How are we even sure who is the majority in the House?

“My advice is we should take things calmly. Like our brothers in the North will say ‘kadan kada’, Igbos will say nwayo, nwayo; and Yoruba will say ‘E fara bale oo’. That is what the situation in Nigeria today calls for. If we rush into this storm, we may not survive it.

“All these neophytes who are making noise here and there seem to have been too young to learn from history of this country. That was how the crisis in the Western region started. Like child’s play, that crisis led to the civil war. No nation goes through civil war twice and survive.

Speaking further, George said Oshiomhole as national chairman of the ruling party should direct his energy on assisting the government to alleviate the suffering of Nigerians rather than engaging in flippant issues such as Saraki’s removal.

While calling on the APC helmsman to respect the wishes of the senators who elected Saraki, he said Oshiomhole must have been too young to learn from the Western region crisis of 1965 which later snowballed into the Nigerian civil war.

He said if war erupts in Nigeria today, the likes of Oshiomhole will be the first to flee while the masses in the country will be left to bear the brunt of the war.

“Let us be very careful. All these threats and talks are things that can conflagrate the country especially from the chairman of the APC. He must have been too young to learn what happened in the Western House. He should learn to respect the wishes of the senators who elected Saraki.

“When Saraki and others move from our party to their party, was there any crisis? He has a right to do what he wants to do. There is nothing tying him down. Why should he resign?

“Is Saraki’s resignation the major challenge confronting our nation today? We are talking about basic standards of living of Nigerians such as schools, good housing, infrastructure, agriculture, healthcare and good economic indices to attract investors. These are basic issues we should discuss not trying to be in power by force. It doesn’t make sense.

“Like the Yoruba will say ‘he abandoned leprosy and he is busy looking for cure for eczema’. People are hungry in the country. This is Sallah. How many people are able to buy ram?

“These are ideological issues he should address as chairman of the ruling party but he keeps shouting Saraki must resign. Is that an issue? Is that what will bring food to the table of Nigerians? What is wrong with this boy? He is behaving as if he is a dictator.

“Even those of us who went to the military have learnt the rudimentary things of what is called democracy and I want the president to take a cursory look at all these people and call them to order because they won’t be there if they create crisis. They will be the first to run away.

“They should tell him in clear terms that this is not a labour union. He is not in Edo State. What is the total number of registered voters in Edo State? Let him come to Lagos where we have 10 million registered voters only in Lagos State. He is trivialising issues as if he is a king in one local village. This is Nigeria.”

In his reaction, Musa who is the National Chairman, Peoples Redemption Party (PRP) and former governor of Kaduna State, said aside the senators who elected Saraki, any other person demanding his resignation is merely wasting his time.

“What is the opinion of the senators who elected him in the first place? Are they also calling for his resignation? Because it is only they who can remove him. It is not the responsibility of APC to remove him or ask him to resign.”