A driver lost consciousness today after he was allegedly assaulted by some police officers over refusal to give bribe. 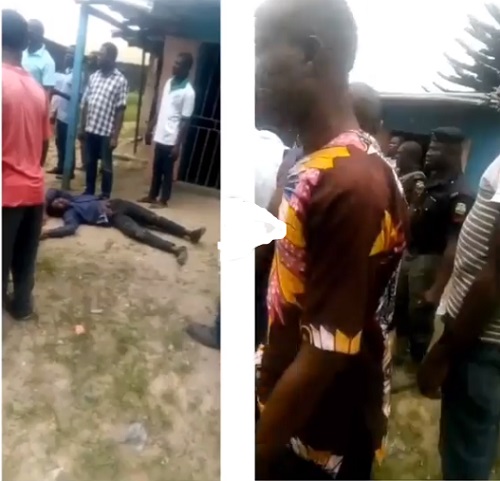 The driver on the ground after being beaten (Photo: National Helm)

Many people were left in a state of shock today in Port-Harcourt, Rivers State, after a driver lost consciousness while allegedly being beaten up by some bribe-seeking policemen.

According to reports by National Helm, the man who is a driver was reportedly accosted by the officers, along the Choba/Ozuoba road, Port Harcourt. .

And in a bid to extort money from him, one of the policemen kept dragging the steering wheel with him as he tired to reverse.

However, after bringing the car to a halt, they dragged him out and beat him till he lost consciousness.

The incident angered some bystanders who berated the officers for trying to abandon the victim afterwards.

Everything later turned chaotic, as the policemen went about threatening to beat up anyone who confronted them at the scene. As at the time of filing this report, the fate of the driver remains unknown.