Former Vice President Atiku Abubakar on Tuesday promised to end the Boko Haram insurgency in the country if elected president in 2019. 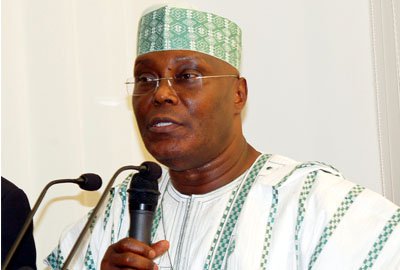 Speaking while addressing PDP supporters in Borno at the Forshams Hall in Maiduguri, Alhaji Atiku Abubakar on Tuesday, vowed and promised to end the lingering Boko Haram crisis and other criminal activities such as the herdsmen/farmers clashes within shortest possible time if elected as President of Federal Republic of Nigeria come 2019.

The former Vice President who is now aspiring for President on the platform of the Peoples Democratic Party (PDP) ahead of 2019 general election, said:

He said “Nigeria ended its civil war in only 2 and half years despite the thick forest in the south-east. I wonder why the war against insurgency took us 9 Years without headway, there must be something wrong some where.

“if elected as President of the Federal Republic of Nigeria, i will not allow any commander to tell me stories, we must end insurgency within shortest possible time because the insurgency has crippled everything in the Northeast”, he added.

He said Nigeria is one of the most poorest nation in the world, characterized with abject poverty, unfortunately, insurgency is associated with poverty. So given the mandate, he will also address poverty which is more prevalence in the Northeast.

Atiku alleged that the increasing cases of criminal activities associated with herdsmen/farmers clashes, leading to loss of lives and property, was as a result of bad governance under the present administration.

He noted that, unless Nigerians team up and voted against the present ruling All Progressive Congress (APC) government at National, states and local government levels, the situation the country found itself will even be worst in near future.

Weep Not For Fayose, Weep For Nigeria - By Femi Fani-Kayode