The Independent National Electoral Commission has dared the Ekiti PDP gubernatorial candidate to approach the court to express his discontent with the outcome of the election. 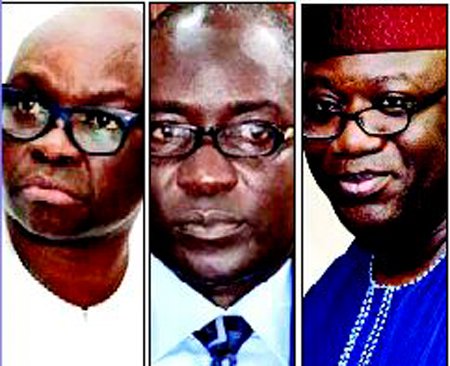 Ekiti State Peoples Democratic Party (PDP) candidate in last Saturday’s election has got a reply to his threat to challenge the result in court, The Nation has reported.

The Independent National Electoral Commission (INEC) said Prof. Kolapo Olusola–Eleka should go to election tribunal if he is not satisfied with the outcome of the election.

All Progressives Congress (APC) candidate Kayode Fayemi won the election, which was widely adjudged to be free and fair.

Fayose described Fayiemi’s victory as temporary, adding that it would be upturned at the tribunal.

He alleged that nobody was rejoicing in the state, asking why people were not celebrating if the result reflected the will of the people.

Ado-Ekiti, the state capital, was in a carnival mood on Sunday when Fayemi’s motorcade from his Isan home drove slowly to the APC’s secretariat, where he addressed a huge crowd of dancing and singing party supporters and residents.

APC National Chairman Adams Oshiomhole said the ruling party was celebrating the outcome of the election because “under President Muhammadu Buhari’s government, we now can see that election can be conducted without people being hospitalised or some finding their way to the grave because they have been killed in the process.”

INEC insisted that the result of the election was a reflection of the will of the people.

The agency’s Director of Voter Education and Publicity, Mr. Wole Osaze-Uzzi, said: “INEC welcomes the decision of Prof. Eleka to go to the tribunal on the outcome of the governorship election. That is the proper thing to do.

“Legal process is a better resort than making inciting statements and engaging in media trial. We welcome judicial intervention on disputes arising from the election. Just like in the case of Edo State, it is left to Eleka to prove his case before the tribunal.”

Osaze-Uzzi rated the outcome of the election as “good and a fair reflection of the will of the people of Ekiti State”. “Even international and local observers rated the conduct of the poll as good,” he said, adding:

“We have been receiving preliminary reports from the accredited Civil Society Organisations (CSOs). Most of those in the so-called Coalition of Civil Society Groups were not accredited for the poll by INEC.

“The materials and logistics were on spot and accreditation of voters started as and when due in more than 92 per cent of the polling units.”

Responding to a question, Osaze-Uzzi said: “INEC is yet to have a post-mortem session on the poll but we have received oral briefing from some of our National Commissioners and others on ground.

“Certainly, we will hold a post-mortem meeting when all officials are fully back.”

Fayose said Buhari’s endorsement of the poll he described as a “charade” showed that the President lacked democratic credentials.

Fayose said: “I hold my head high and I can never be suppressed.”

Reacting to a statement on Sunday by presidential spokesman Garba Shehu entitled: “Fayose: In the end, a high-powered nothing.”

Fayose,speaking through his Chief Press Secretary Idowu Adelusi,said “President Muhammadu Buhari should not be happy and applaud this situation whereby the police, army, civil defence and INEC were used to snatch the collective mandate freely given to the Peoples Democratic Party candidate, Prof. Kolapo Olusola and delivering it to the All Progressives Congress candidate which Ekiti people rejected.

“Can you call that election?  Of course not, it was a contest between Olusola and the INEC and security agencies.

“There was indiscriminate arrest of our party leaders, harassment and brutalisation of voters in a massive scale especially in Ado, Ikere and other areas.

“The thugs imported by the APC operated freely under the cover of security agencies to snatch ballot boxes, create confusion, cause mayhem and drive away voters in PDP strong holds. Our party agents were driven away with gun.

“Buhari has demonstrated truly that he is not a democrat, but a dictator who is yet to get over military mentality. Muscling of democracy in Nigeria today by the Buhari administration is not about Ekiti alone.

“Presidential aspirants and PDP states should prepare to have a taste of brutality of this administration. This is why we all need to stand up to rescue Nigeria.”

“I am Peter Ayodele Fayose, I hold my head high. I can never be suppressed. I don’t lose battles and I will not lose this. I will laugh last. Those waiting for me, will wait in vain.

“They should remember what the prophet said to that heady king in the Bible, which applies to them. He that wears the armour should not boast as he that removes it.”

“It is only Buhari that will pride himself with the security shooting sporadically at polling centres, scaring people to pave the way for the APC thugs to snatch ballot boxes.

“What Buhari has won as referendum from Ekiti people, Nigerians, and international community is shame. If APC has truly won, why is it that there is no jubilation in Ekiti?

“The victory of Kayode Fayemi is pyrrhic. We will reclaim the stolen mandate in the court by the power of God.”

Speaking after the National Working Committee (NWC) meeting of the APC in Abuja, Oshiomhole said: “We are particularly excited not because we won, but like we said the last time, what matters to us is the process rather than the outcome. We just want to make sure that the results of election reflect the will of the people.

“You will also recall that there were issues about police deployment. I am very happy that all the commentators and observes including the EU, are happy that the election was free of violence and that the process was free and fair. We cannot ask for more.

“We are very proud of this accomplishment and we have asked Dr. Fayemi to use the intervening period between now and then to reflect on all that he needs to reflect on so that by the time  he is sworn in formally, he will hit the ground running because the Ekiti people can not afford to wait any longer to begin to see a renewed and refocused leadership that
will ensure the quality of life of the Ekiti people.

“We have also appealed to him to readily see the wisdom to carry along various shades of opinion and also reach out to the opposition and ensure that he carries them along in the governance of the state. That is the promise of democracy.

“In fact, democracy works well, regardless of who wins, if the winner governs well for the benefit of all. Indeed, the people can never lose in a democracy and we trust that Fayemi will do all that, including addressing the huge liability.”