The All Progressives Congress has reacted to the announcement by Governor of Benue State, Samuel Ortom, that he is no longer with the ruling party. 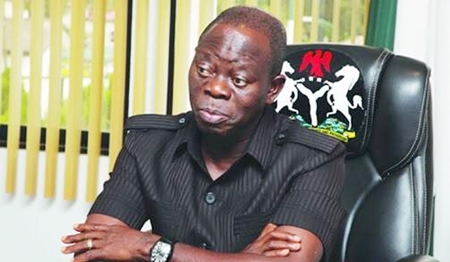 While speaking with newsmen at the APC secretariat after a meeting of the National Working Committee, the national chairman of the party, Comrade Adams Oshiomhole said on Monday that the party has not shut its doors to any governor elected on the platform of the party.

The former governor who also dismissed reports of reported exit of Benue state Governor, Samuel Ortom as a mere rumor, said Nigerians must come together with the same vigor they fought the Boko Haram insurgency to be able to defeat the menace of herdsmen killings rather than attaching ethnic and religious sentiments to the killings.

Responding to a question on the reported exit of the Benue state governor who alleged that he was pushed out of the party, Oshiomhole said the governor had assured him on several occasion that he will not be leaving the party, pointing out that if he has actually left, the party would need to study the situation before formally reacting to it.

He said: “I know that governor Ortom is a very senior member of the party and he has said so repeatedly in print and has said to me one on one basis that he will not leave the APC unless he was pushed out.

“I have since assumed chairmanship of this party along with my colleagues in the NWC and I know of a fact that we have not shut out any governor and certainly not governor Ortom.

“In these days of social media, I will not be responding on the basis of rumor and unverified reports. In fact, talking about unconfirmed sources, on Saturday, I was in Lagos to honour an appointment that had been booked for over the past six months and I felt obliged to honour that appointment and yet some of these merchants of untruth and fabricators of fake news posted all sorts of stories including one of which I was being interviewed in Ekiti.

“I was only there in Monday to address Labour leaders and on Tuesday, to participate in the grand finale of the campaigns of which Mr President was there and I left Ekiti that same day on the same aircraft as Mr President.”

Oshiomhole said the party is concerned about the rising wave of killings across the country, adding that security agents in the country must wake up and prove to the Nigerian people that they have the capacity to defend them and ensure the safety of lives and property.

He said: “We have also deliberated on the unfortunate incident that occurred in Sokoto state last week in which a number of innocent Nigerians were killed in cold blood by gunmen.

“We are worried about this and our preliminary investigations showed that those affected come from a part of the state that can be said to quite rural and probably a place where people don’t even have cattle. All they have is just their farm land.

“This killing, like other killings across the country is condemnable and the NWC condemn them in the strongest words possible, we believe that every Nigerian, regardless of his location has a right to life.

“No one will be satisfied with making explanations or try to explain away why we cannot secure human lives especially of a Nigerian citizen within the borders of Nigeria.

“We want to strongly appeal to all Nigerians and the media should help us in this process. This is the only country that we have and so, we must do everything to give every Nigerian a sense of security regardless of his accident of birth place which some people refer to as ethnic origin or his choice of residence of religious belief.

“It is not helpful to national efforts of security lives and property if any Nigerian, including religious leaders and Media seeks to explain criminality in terms of religion or ethnic nationality. This is unhelpful in terms of our collective responsibility to work with security agencies to provide useful information that can lead to the arrest of criminals and also help them to preempt any plan by criminals to undermine our collective security.

“Those responsible for the wanton killings in Sokoto and those who are victims are of the same ethnic origin and unarguably of the same religious persuasion. It is the same thing in Zamfara state.

“It is not between one ethnic group or the other and so, if these criminals found themselves in other parts of the country as they have done from time to time, and their victims are of different ethnic origin, we should insist that we treat them for who they are, criminals that government has a duty to pursue and chase out of the territory of Nigeria and all those who are perpetuating crimes be brought to justice in accordance with the provisions of our laws.

“As a nation, we should all be united, not only in co democracy in this wanton killing, but also in helping government to do what it has to do compel security agents to live up to their mandate. It is clearly unhelpful and it bothers on divisive politics if we seek to disguise criminality either in religious terms or ethnic terms.

“Government has a duty to protect all citizens regardless of their religious belief. I ask the Media to help us to educate the people that it does not help the process of law enforcement if crime and criminality are identified in terms of their ethnic origin or their religion.

“But we are together as a party and Nigerians that this killings stand condemned and our security must do everything possible to convince Nigerians that under their leadership, we are safe and secured. They must continue to review their operational modalities in the light of emerging threats.

“The Buhari government is determined to do everything possible to secure the live and property of every Nigerian. That is one of the key objectives that this government committed itself to.

“Unfortunately, as much as we have made progress, we cannot but commend the President and security agents in decimating Boko Haram.

“Unfortunately, while we are making progress in this area, new form of criminality is emerging, we need the same kind of national effort and unanimity in working together to defeat this new criminals that are emerging. We will work
with the government and encourage them to do everything it has to do to bring criminals to justice and secure the lives of every Nigerian.”