Ahead of the upcoming 2019 presidential election, former minister of information, Jerry Gana, has announced his intention to contest alongside President Buhari, and others. 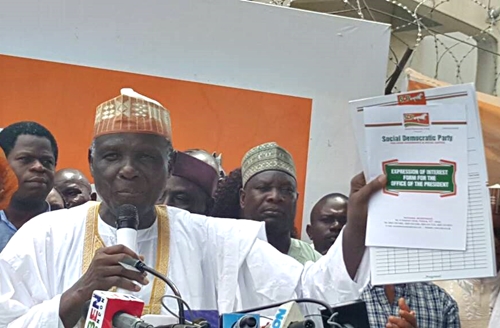 Former Nigeria’s minister of information, Jerry Gana, has on Thursday, declared his intention to contest for the 2019 presidential election.

The influential politician and elder statesman picked up the expression of interest form of the Social Democratic Party (SDP) at the national secretariat of the party in Abuja, on Thursday.

Whiles speaking to correspondents, he said with over 40 years of his vast experience in politics, he has what it takes to salvage the country from its “present state of collapse”.

Gana said the current leadership of the government seems “unconcerned, incompetent and incapable of turning around the drift”, adding that he is concerned at the real prospect of Nigeria imploding unless the great party (SDP) comes to the rescue .

“Every patriotic Nigeria, everyone with sense of compassion, and love for people will know that Nigeria needs to be really rescued because the nation is going through a difficult time,” he said.

“The unprecedented insecurity across the land in which people are been killed in such horrible intensity and inhuman ways in which this is done.

“Being a patriotic and committed democrat who has carried a burden for the rapid, effective and even development of the country for decades, I am deeply concerned at the very real prospect of Nigeria imploding unless our great party comes to the rescue with a God fearing, dynamic, untainted and credible leadership.”