President Muhamamdu Buhari has explained why his administration decided to disburse the $322 million recovered Abacha’s loot to poor Nigerians. 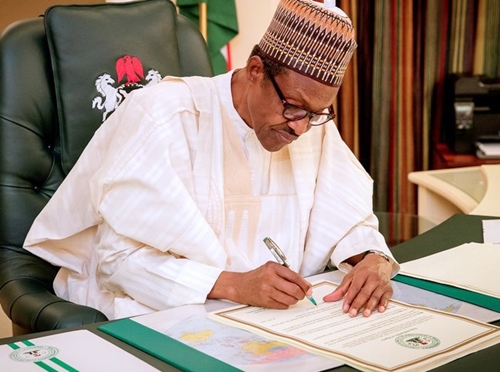 President Muhammadu Buhari, has on Wednesday, said that the federal government signed the Memorandum of Understanding, MoU, with the World bank and Switzerland to lift people out of poverty, Vanguard reports.

President Buhari made this known at the inception meeting of the Mantra project on asset recovery and development in Nigeria by Africa Network for Environment and Economic Justice, ANEEJ in collaboration with World bank and Switzerland government.

The President, who was represented at the occasion by his Special Adviser on Justice sector reform, Barr. Juliet Ibekaku-Nwagwu, said the choice of investing the recovered loots in the Social Investment programme as captured in the MoU was taken to address the problem of extreme poverty and create social equality among Nigerians.

The president said the administration is committed in partnering with both local and internal partners to ensure transparency and accountability in the management of the recovered loots.

‘‘We are determined to ensure all returned assets back to Nigeria are well utilized.

‘‘When it is returned we want Nigerians to know where this money is being invested in and that is why we signed the memorandum for understanding on the management of the returned assets from Switzerland.

“The $322million that was returned to Nigeria, we invited Civil Society Organisations to be part of the negotiation. After the negotiation by Nigeria with World bank and Switzerland, we signed that memorandum to make sure that everybody can monitor the use of the funds.

‘‘The use of the funds to be applied to Social Investments, particularly to targeted cash transfer is to lift people out of poverty. We know people who are today in this country that wake up in the morning and don’t even know where to get their meal from. I’m sure you’ve experienced people within your communities so this whole project is to address that problem to create social equality, to provide opportunity.

‘‘There are several countries in Africa where this project has been implemented and it has worked perfectly well, so we are using international standards developed by the World bank. The idea is if we can lift one person out of a household out of poverty, it will inevitably affect the entire family.

‘‘A woman was being paid five thousand naira consistently over time when this program started in 2016, the money she has been able to use it to buy cassava, she’s able to process cassava, she’s now selling garri. What it means is that every day she’s sure that her family will have something to eat and so we want that to happen to several millions of Nigerians, who are living below poverty line today.’’

It started with the Northeast due to the problem with the zone, where many people were displaced and so many people could not even go to their farms.

According to the AGF, all the 36 states of the federation today have signed onto the social investment program. The program is expected to be launched this July which will see the disbursement of the $322 million Abacha’s loot from Switzerland.

However, she said the government is currently working on deployment of the social electronic platform that would help government and the public monitor the disbursement process.