Luck has finally ran out on some suspected robbers after they were caught fighting over loot they stole. 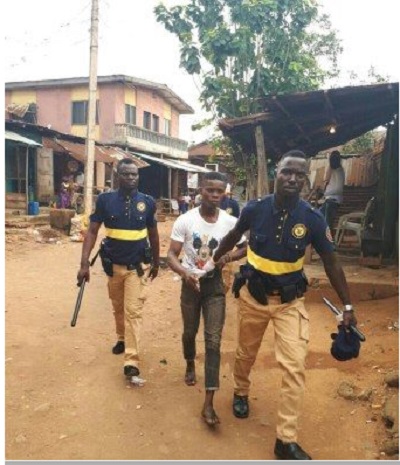 One of the thieves after he was caught

The operatives of Lagos State Neighbourhood and Safety Corps, LNSC, have arrested two suspected armed robbers who were fighting over the sharing of their loot, according PM Express.

The sad incident happened on Monday evening at about 5pm at the UBA branch located at Arida bus stop in Ikotun area of Lagos.

Information gathered from residents revealed that the two suspects whose names were not disclosed by the LNSC officers were said to have gone for an operation, succeeded and moved to the bank to share the loot.

While the sharing was on, fight broke out between them. One of the suspects then opened up and told the residents that they went for an operation, succeeded and had come to the bank to share what they got and his colleagues attempted to cheat him.

He said that it was better for both of them to face the consequence than for him to be cheated in the deal.

Thus, the LNSC operatives were contacted who promptly arrested the suspects and took them to their office located at the Ikotun/Igando LCDA in LNSC vehicle.

LNSC office confirmed the story to PM Express that the arrest was made, but that the men were later allowed them to go because of threats. It was gathered that the suspects told the officers that they were working for a top politicians as such they cannot detain them because all their efforts will be futile.

This might have led to the release of the suspects while LNSC officers pretended that they were being taken to their office.

However, their action attracted condemnation from the residents who blamed the officers for letting them go free. They said that since the suspects had confessed that they were robbers and had revealed the cause of their fight at the bank premises that they should have handed them over to the police if they could not handle the situation at that time.